April 01, 2017
Now and then the need arises to plot data in realtime. I know how simple this is using LabView but I always pefer Python for its versatility in data analysis. However when it comes to plotting data in realtime I have never seen any easy solution for Python. For my daily plotting needs I mostly use matplotlib but the Bokeh project is currently ahead when it comes to interactive plotting for the web. Another exciting development has been Python3's  asyncio  which is python's native approach to an event driven framework. This puts python in the spotlight for io-bound applications for which people would use node.js. Combing the Bokeh and asyncio allows building an interactive, realtime plotting application in less then 30 lines of code . I did not find any official documentation on how to do this so I decided to provide my own adapted from the official example here . I suggest to have a look at the official example to get a better understanding how the asyncio version wor
Post a Comment
Read more

A multiprocessing map function for python

May 03, 2014
Often one wishes for a simple way to speed up CPU intensive tasks in python. This version of python's map( .. ) function takes of process based parallelization and circumvents the restrictions of the global interpreter lock  (GIL). One problem with using the multiprocessing Queue in python is that the submitted jobs are not processed in the submitted order. Therefore, before anything is returned, it is sorted by the input. Now just use mp_map instead of map and enjoy unrestricted speed :)
Post a Comment
Read more 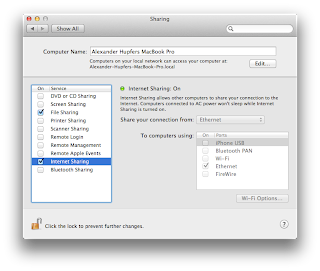 The Raspberry Pi is a great piece of hardware. However you don't always want to hook it up to some screen and keyboard when working with it. I in fact never did since I like to do everything using SSH which is enable out of the box if you are using the raspbian distribution. So just hook it up to your router and start hacking. But what if you have no router and only you Mac? The Raspberry Pi is configured by default to receive an IP address from a DHCP server. So you need a DHCP server. This can be done using the sharing option in OSX. Just set it up like that, ignore the warning about your ISP, since you are not connecting to anything but you Raspberry Pi. You can also share your wifi-connection if you are at home but if you have secure enterprise wifi this option doesn't work. Once you have enabled this option just connect your mac and Raspberry Pi using an ethernet cable and THEN connect the power to the Pi. Also note that you don't need a cross-over cable,
2 comments
Read more

June 29, 2011
If you want to stay stay with free tools and mount ssh shares on OSX MacFusion is the tool of choice. However for me MacFusion quits with an error "Failed to mount" and the log revealed: (SSHServerFS, phy303.uni-regensburg.de, 29.06.11 19:27) /Library/Filesystems/fusefs.fs/Support/fusefs.kext failed to load - (libkern/kext) link error; check the system/kernel logs for errors or try kextutil(8). This is a bug in the current MacFuse version (2.0.3). The solution is to install the NTFS-3G Project's MacFuse binaries at tuxera.com Thanks to Jacobs UNIblog
Post a Comment
Read more

June 24, 2011
Want to use your favorite operating system of your favorite laptop? The 2011 Macbook Pro uses a Broadcom 4331 chipset for which there exists no driver at this point. And according to the Ubuntu forums NDISwrapper does not work either. However Broadcom states that: "We have plans to support the BCM4331, and other new chips, with the brcmsmac driver. I don't have an ETA, but new chip support is the first thing on the priority list after getting the brcmsmac driver out of staging." Also there are also community efforts to create a driver and today one kernel-hacker told me: "Hey, the work has just started and its really hard as we don't have ANY specs. Everything I write is from dumps without knowing real stuct of the driver. There is a lot if guessing, starring at the dumps and trying to find a relation with specs for older cards. I'm on vacations right more, I expect to perform first tests in 2-4 weeks, do then ill be able to tell you more."
Post a Comment
Read more

February 06, 2011
Can't afford a Mac? Wanna do iPhone development with Ubuntu? There are reasons why one would want to have OSX running on VirtualBox but getting it to run is not so easy. First of all you need - VirtualBox - Hazzard OSX Distribution, can be found on the net Now set up a new virtual machine in VirtualBox and select Mac as operating system. The harddisk size should be at least 10GB, I chose 20GB This gives you EFI enabled in the system tab of the virtual machine's settings. Next boot the Hazzard OSX Distribution an start installation. Use the Disk-Tool to make a new partition. Don't start the Installation yet! You need to customize it and only install the Legacy Kernel and the latest Chamealeon bootloader. This is all and you can begin the installation. When you're done and before you boot into you new system go the the virtual machine's settings again and switch off the EFI option in the system pane. The last step is to switch off Apple CPU power manageme
Post a Comment
Read more
More posts

Alex
Hi, this is a blog about stuff I (do) like. So it might be interesting for people like me but at least for myself. I have a major in physics and am a technology geek. This Blog has been started before Facebook when people thought they need blogs and as I don't even do status updates in Facebook there hardly anything new if you check back.